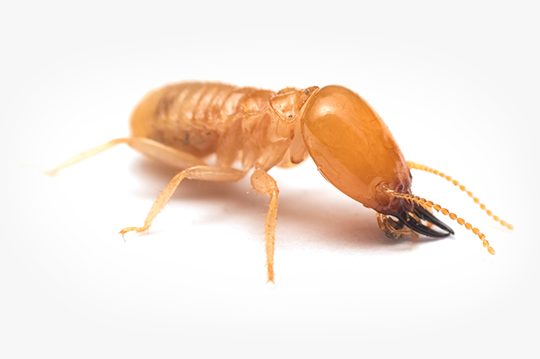 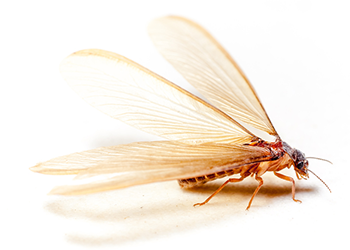 Although small in size, these insects invade homes and businesses in swarms every year. In the Southeast, the population of termites is higher than in other areas. Usually people do not realize there is a problem until a swarm of termites eats through the wall and begins flying around inside. Their presence is not readily noticed because they hide their activity behind wood trim, siding and wallboards. Let our experience help keep termites away from your home. Our technicians have extensive training and experience in controlling and preventing these pests from making a meal out of your home. Our service provides the latest technologies and methods to control subterranean termites.

Subterranean termites have preferences in the type of wood they will eat. Decayed wood is eaten faster and preferred over sound wood. Termites also facilitate decay by increasing moisture content in the wood. This usually means termite damage is associated with decaying wood. Subterranean termites consume wood at approx. 2 - 3 percent of their body weight each day. The average mature colony of eastern subterranean termites contains about 60,000 to 1 million workers. Under the best conditions a colony of 60,000 would consume about 5 grams of wood each day. It would take a colony approx. 118 days to consume a 1 foot length of 2 by 4 pine.

Termites harbor one-celled organisms in their digestive tracts, and these organisms convert cellulose into substances the termites can digest. 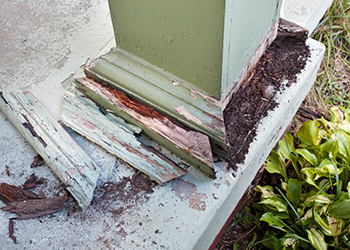 The order Isoptera consists entirely of termites, which are primitive insects closely related to cockroaches. Termites are social insects. This means there is a division of labor among different types of termites, called castes.

Perform all of the work of the colony and are the forms that do all of the damage to structures.

Serve only to defend the colony against enemies; cannot eat wood. Both workers and soldiers are blind.

Winged adults (swarmers) emerge from colonies on colonizing flights. A male and female with pair up, lose their wings, and construct a small cell to mate and start a new colony. The caste most often seen by homeowners. Each termite colony is self-supporting and independent.

Wingless or short nonfunctional wings. Develop as needed and quickly replace a primary queen who is injured or dies. They are responsible for the production of most of the eggs within a colony after it is established. In a colony of 1 million, the queen may have laid 10,000 eggs and the supplementary reproductives are responsible for the remainder. 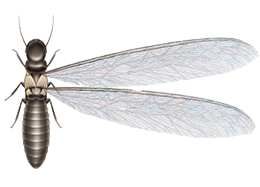 What Are the Signs of Subterranean Termites?

Subterranean termites, of which Eastern subterranean termites are the most common, are termites that live in underground colonies and burrow up to feed on moist wood. This wood must be in direct contact with the soil. One sign of a subterranean termite infestation, then, is the presence of mud tubes reaching from the ground to the termites' food sources. Mud tubes are tunnels of about a pencil's width, usually tan or dark brown, and often found over concrete and plastic barriers. They provide the termites with moisture as well as protection from any predators.

Another serious sign of an infestation is the presence of discarded wings, normally in the summer. These are left by winged termites once they have found a mate, and so they signify that a new colony will be formed.

What Is the Difference Between Subterranean and Drywood Termites?

The main difference is in their nesting habits: Eastern subterranean termites need soil and moisture, whereas drywood termites can survive in dryer climates, free from the soil, and without the need to construct mud tubes. Drywood termites, in fact, usually live inside the wood structures they feed on.

Eating habits differ, too: drywood termites eat all of the wood structure they inhabit, eating across the grain, whereas the subterranean kind eats the softer parts of wood and always with the grain.

Do Subterranean Termites Cause Damage?

Yes, more than drywood termites. They will eat any moist wood and any structure containing cellulose. Because of their hidden way of living, they are hard to detect. If left alone, they can hollow out wood structures from the basement up to the attic, including support beams, walls, and furniture. Every year, their activities cost U.S. homeowners hundreds of millions of dollars in damage.

Where and How Long Do Subterranean Termites Live?

True to their name, subterranean termites live underground, sometimes 20 feet below the surface. As for their life span, it varies. The queen of a termite colony can live for a decade or more, while the workers (the termites that burrow up for food) can live between one and two years.

Do Subterranean Termites Live in Wood?

Eastern subterranean termites do not live in wood; they feed on wood and take the food back to their colony, which is their home. They can sometimes be found infesting moist logs, trees, mulch, and firewood, but again, only temporarily.

How Deep Do Subterranean Termites Go?

Sometimes as deep as 20 feet. It all depends on temperature and the amount of moisture that the subterranean termites require.